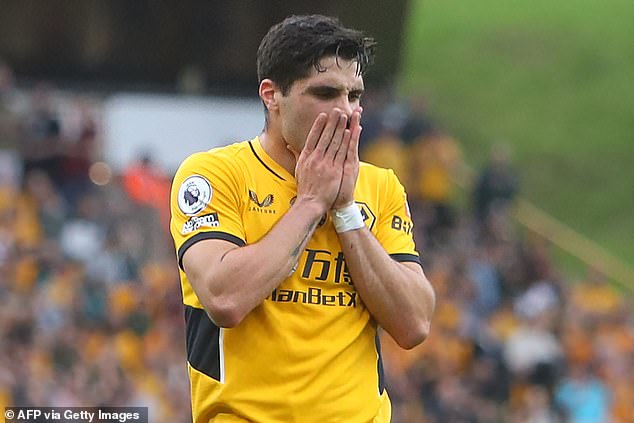 Wolves 1-1 Norwich: Hosts’ hopes of playing European football next season come to an end after frustrating draw against relegated Canaries

By Daniel Matthews For Mailonline

Perhaps the nicest way of looking at it? This felt like a fitting end to another season of home discomforts at Molineux.

No Premier League ground has been as hospitable to visitors over the past couple of years – Wolves have suffered 17 defeats here since August 2020.

Norwich, already relegated and chasing some ugly records of their own, failed to add to that total. So that’s a positive, at least.

Beyond that, though, this was a fairly unedifying way to sign off Bruno Lage’s first year in charge. Boos at the end of each half, protest songs, and a largely dreadful display. It could have been worse, had Rayan Ait-Nouri not cancelled out Teemu Pukki’s first-half opener.

Lage has been a victim of early success, certainly, but with no win in six now, is it any wonder he wants an overhaul – and some fans are starting to turn?

It is not as if Wolves had nothing to play for. At the start of the day, they knew only victory could keep alive their European ambitions.

And yet, within half an hour, mutiny was in the air. ‘You’ll have a riot on your hands,’ the home crowd sung on repeat. They were protesting the possible sale of Ruben Neves – a tad excessive, perhaps – but Wolves had offered little to improve the mood.

Finn Pukki caused Wolves problems in the first half, missing one chance and then having another shot saved by John Ruddy

At half time, Norwich led at a canter; Pukki could have had a hat-trick inside 15 minutes. He had already spurned a couple of openings by the time he twice found space to shoot from a tight angle. First, the forward clipped an effort wide of John Ruddy’s left-hand post.

Then, from an almost identical position five minutes later, Pukki’s low shot was saved, the ball rebounded into the path of Kieran Dowell, who was denied only by a sliding challenge from Toti.

There was no third let-off. Played in down the right channel shortly before the break, Pukki stood up Conor Coady and dribbled a shot inside Ruddy’s near post via a tiny deflection. It was dismally soft; Lage was furious, so were the crowd.

But he did eventually score, slotting the ball calmly into the corner after jinking into the box

Wolves were lacklustre in attack in the first half, with Raul Jimenez’s ambitious lob one effort at goal

Coady was taken off at the break – some way to mark his becoming the first player to make 150 Premier League appearances for Wolves. Alas, the change worked and within 10 minutes Wolves were level.

Norwich failed to clear a free-kick and after the ball briefly clattered around the area, it landed on the head of Ait-Nouri to nod across Angus Gunn.

Suddenly Molineux was alive with noise of a different kind and Wolves thought they had the lead when Chiquinho’s cross found Pedro Neto at the back post. Somehow his stooping header was tipped over by Gunn.

Pukki came close again shortly after before Norwich held on. It means they avoided a sixth consecutive defeat but end the season without an away win against a non-promoted team.