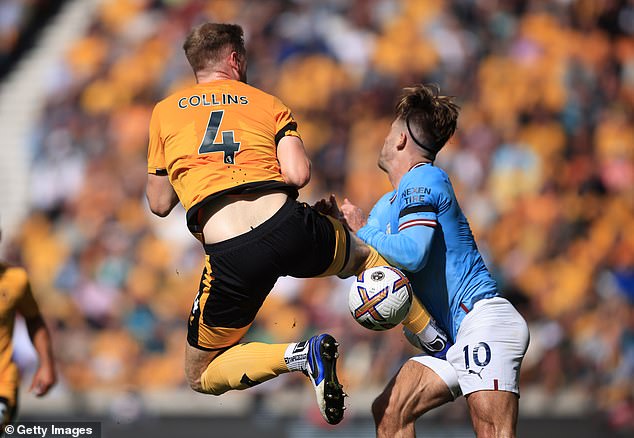 As both players went for the ball on the far left of the touchline, Collins launched into the England star with a high kick to the midriff, leaving Grealish a heap on the pitch.

Collins pleaded his innocence but the summer signing left referee Anthony Taylor no choice but to give the defender his marching orders in the 33rd minute of the match.

The £20.5million defender then waited around for 25 minutes until Grealish had finished celebrating and doing post-match interviews to apologise, according to Mirror Sport.

The report suggests that the Northern Ireland international insisted that it wasn’t malicious and that he was going for the ball.

Grealish is said to have accepted the apology after the chest-high tackle but told team-mates it was actually his leg which hurt the most after Collins’ studs went down his body.

Defender Collins has been an ever-present in the Premier League this season. But he will now face a three-match ban for his horror tackle.

Speaking at half time about the challenge, the BT Sport pundits lambasted Collins. ‘He wouldn’t have too many questions about it. It’s a rush of blood to the head,’ Rio Ferdinand said.

Former City star Joleon Lescott questioned what Collins was trying to do as ‘he’s not trying to clear it’.

Fellow pundit Rachel Brown-Finess also criticised the centre-back. ‘He realises how stupid he was and how he’s let his team down,’ she said.

Collins red card summed up a miserable day for Wolves, which started when Grealish opened the scoring for City with his first of the season.

Champions City were two goals up inside a quarter of an hour, as Erling Haaland notched his eleventh goal of already remarkable season for the Norwegian striker.

Phil Foden added a third in the second half to round off another convincing display from Pep Guardiola’s men to move them to the top of the Premier League table.