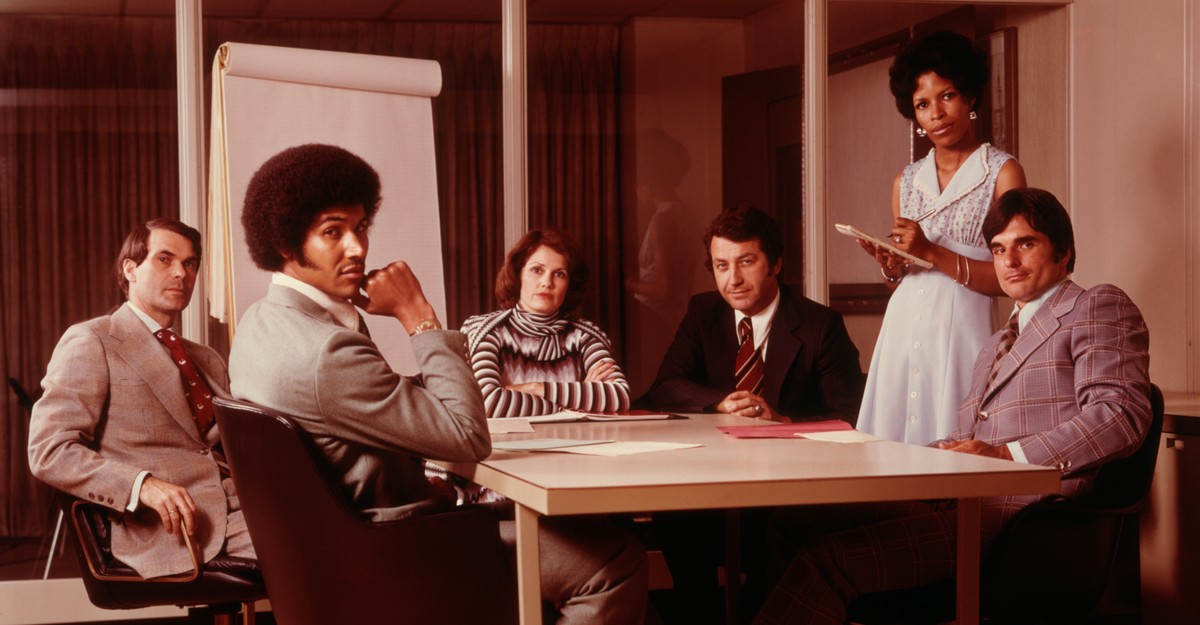 When someone says that their workplace is “like a family,” they want you to be impressed. We share a special bond, they imply. We look out for one another and are effortlessly in sync.

But as a journalist covering work and families, I can’t help but notice another, entirely unintended meaning in this common corporate metaphor: Work is like family—in many unhealthy, manipulative, and toxic ways. When I hear something like We’re like family here, I silently complete the analogy: We’ll foist obligations upon you, expect your unconditional devotion, disrespect your boundaries, and be bitter if you prioritize something above us. Many families are dysfunctional. Likening them to on-the-job relationships inadvertently reveals the ways in which work can be too.

To be momentarily compassionate to this poor, misguided bit of rhetoric, it is understandable that when trying to describe a group of people with whom we spend a lot of time, we reach for the concept of family; the terms work wife and work husband resonate widely because they capture a genuine sense of connection that people feel with their closest office allies.

And there is undeniably something admirable about creating a workplace culture of mutual support and care, as the word family is supposed to suggest. The metaphor may be a source of inspiration in some professional scenarios; mentors might channel the spirit of “an older sibling teaching a younger sibling how to do things,” Cynthia Pong, a New York City–based career coach, suggested to me. Families, like workplaces, exist on a spectrum from outright hostile to nurturing and supportive.

But many critics have—rightly—argued that the workplace-as-family metaphor endorses unhealthy norms. (One article last year in the Harvard Business Review called this framing “toxic.”) When a business is presented as a family, its workers may feel pressure to pledge an unreasonable degree of loyalty to their employer, putting up with long hours, mistreatment, and the erosion of work-life boundaries, all in the spirit of harmony and a shared purpose. In other words, when a workplace resembles a family, it’s frequently for reasons that would make you want a different job (which is more easily fixed than wanting a different family).

Read: Loving your job is a capitalist trap

Families can be unwelcoming to outsiders, especially when it comes to differences in class, race, or sexuality—a pattern that commonly shows up at work too. “Family implies a degree of similarity, of being a good ‘culture fit,’” Tessa West, a psychology professor at NYU and the author of Jerks at Work: Toxic Coworkers and What to Do About Them, told me. This framework is “slippery and bias-prone, and often harms those who are cut from a different cloth than the typical ‘family’ member.”

Work also replicates some of the same troubling gender dynamics that saddle women with undervalued but vital household tasks. “At home, you get asked to do a shitload of invisible labor, but it has to do with household chores,” West said. “At work when you’re asked to do it, it’s about committee work” and organizing, say, birthday or retirement parties—“jobs that are more community-oriented but don’t necessarily give you status and power.” Many workplace families are patriarchal: Men hold roughly four out of every five of the highest-ranking corporate jobs, according to a report from the consulting firm McKinsey and the nonprofit LeanIn.Org.

And both families and workplaces have a tendency to overlook people’s harmful comments or behavior out of respect for a shared history. At family gatherings, “sometimes there’s this idea of like, Oh, well, that’s just Uncle Larry. He might say some homophobic or racist, sexist stuff, but that’s just how he is,” Pong said. “I have seen that happen before in the workplace, excusing people who’ve maybe been around the company for some time, and really not holding them to account for the highly problematic things that they may be saying or doing.”

Although families and workplaces can be unhealthy in similar ways, the problems in each are of a different nature, because the bonds connecting people are of a different nature. When resolving family conflicts, you can (hopefully) rely on relatives’ good intentions and mutual affection. At work, that isn’t enough; the emphasis, West said, should be on designing clear structures that govern how people do their jobs and interact. That could mean a rule to ensure that everyone can get airtime at meetings or a system for documenting employees’ contributions to certain projects so that everyone is given proper credit.

Read: The secret to happiness at work

This vision of work is at odds with the one suggested by the family metaphor, in that it replaces fuzzy notions of loyalty and sacrifice with objective methods of evaluation and clear boundaries. But if we should move away from thinking of our co-workers as a “family,” how should we think of them instead? Maybe we don’t need a metaphor. “We should just learn to redefine what it means to [be] a co-worker and not expect to lay all this other [meaning] on top of it,” West said. If you want to convey that your colleagues are warm and caring, or that they are deeply committed to a shared goal, just say so—no analogies necessary.

If we’re able to draw better boundaries at work, perhaps our relationships there could set an example for other relationships in our life. Maybe, eventually, families might try to communicate how healthy their interactions are with a new kind of boast: “We’re like co-workers here.”