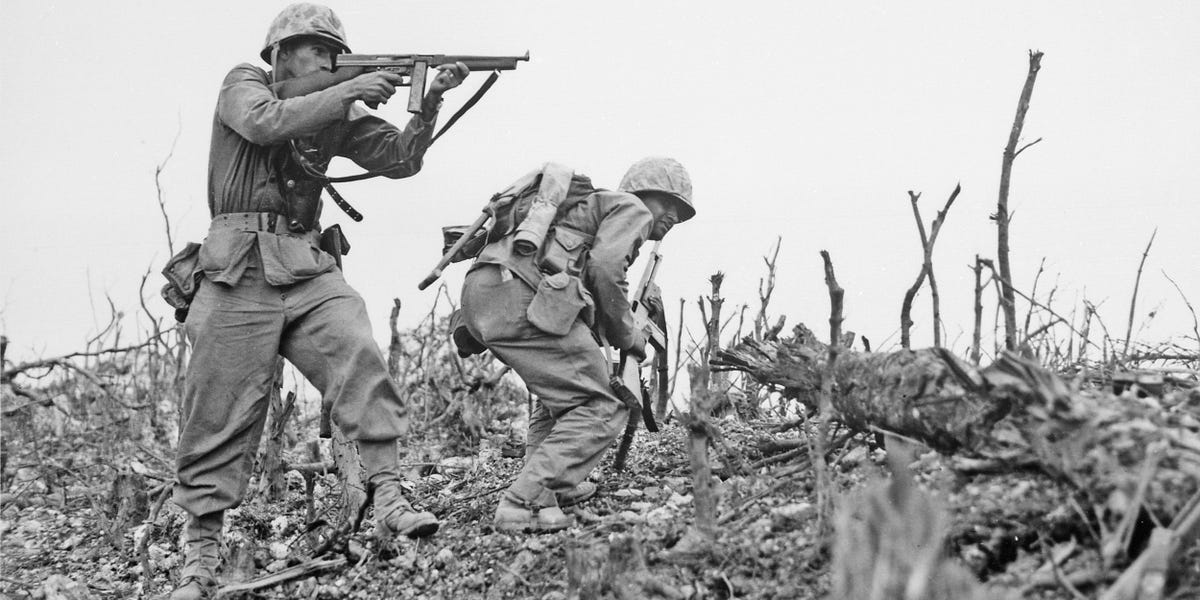 By mid-March 1945, the Allies were closing in on the Japanese home islands. Allied forces were well into the process of liberating the Philippines. Japan’s navy had suffered a string of disastrous defeats that left its fleet almost useless, and the brutal fight for Iwo Jima was drawing to a close.

But the Japanese had shown they were determined to fight to the last man, and due to the US’s insistence that Japan surrender unconditionally, it seemed to US commanders that an invasion of the Japanese mainland was the only way to end the war.

Strategists began making invasion plans. Okinawa, just 350 miles south of the Japanese mainland, was a prime candidate for a staging ground. Aircraft could launch from its airfields, the US Navy could use it as a base to cut off Japanese ships from the rest of Japan’s empire, and Allied troops could gather there for the invasion of Japan itself.

It was obvious that the fight for Okinawa was going to be at least as bloody as the battle on Iwo Jima, where total US casualties outnumbered Japanese casualties for the first time in the war. Okinawa was much bigger, its Japanese garrison was almost five times larger, and, as on Iwo, they had prepared to defend it.

Instead of trying to fight on the beaches, he focused most of his forces on defensive lines on Okinawa’s southern tip, leaving only smaller groups to defend the central and northern parts. Some 60 miles of underground tunnels and dozens of bunkers, artillery positions, and machine gun nests were built using the island’s numerous reverse slopes.

The American invasion force was the largest US amphibious invasion force in the Pacific campaign. Led by Lt. Gen. Simon Bolivar Buckner Jr., it was made up of over 180,000 soldiers and Marines from four US Army and two Marine Corps divisions.

They were supported by more than 1,300 ships from the US 5th Fleet and British Pacific Fleet and by thousands of aircraft from the US Navy and Army Air Forces.

The first landings at Okinawa were on the outlying Kerama Islands on March 26, 1945 — the last day of the Battle of Iwo Jima. On April 1, after a full week of naval bombardments, US soldiers and Marines landed on central Okinawa.

At first, it appeared to be going surprisingly well. The Americans encountered almost no enemy resistance. By the end of the first day, the Kadena and Yontan airfields were easily taken. Marines began to clear the northern part of the island while soldiers moved south.

On April 6, the Japanese navy, in a desperate attempt to defend the island, sent the largest and most powerful battleship ever built, the Yamato, on a suicide mission against the US Navy.

Yamato and five of her escorts were sunk just one day into their voyage after being hit by at least 15 bombs and eight torpedoes in an attack by 300 US Navy aircraft, killing more than 4,000 Japanese sailors.

But the Allies’ initial successes suddenly came to a halt.

As the Americans advanced south, they walked straight into well-prepared enemy kill zones and ambushes. Constant artillery, mortar, and machine-gun fire from fortified and hidden positions, along with Japanese nighttime assaults and counterattacks, slowed most progress.

The fighting was especially hard along the Shuri and Machinato defensive lines, where the reverse slopes provided clear fields of fire on exposed American troops. To make things worse, late April brought the rainy season, turning battlefields into mud pits. Tanks and armored vehicles were left almost useless, and the offensive ground to a halt.

At sea, the battle was just as intense. With their navy unable to mount any resistance to the superior American fleet, the Japanese turned to mass kamikaze attacks from the air.

Although kamikaze attacks were used in previous battles, Okinawa was the first time they were launched simultaneously and in overwhelming numbers.

Over six weeks, thousands of planes from bases in Kyushu, the southernmost of Japan’s main islands, conducted about 1,900 such attacks.

Among the planes was a new type of weapon: the Yokosuka MXY-7 Ohka, a 2,600-pound rocket-powered manned kamikaze aircraft.

Despite the fierce resistance, American troops continued to advance. On April 20, the northern part of the island was fully cleared. By the end of May, Naha, Okinawa’s capital city, was captured after being virtually destroyed.

Aided by airpower, naval bombardments, additional landings, and flamethrower tanks, the Americans were able to finally capture the last part of the island on June 22 — nearly three months after the battle started.

The total casualties were staggering: over 12,00 Americans were killed and 36,000 wounded. Among the dead were Buckner, the overall commander, and Brig. Gen. Claudius Miller Easley, commander of the Army’s 96th Infantry Division. Both were killed in the final days of the battle.

Of the over 100,000 Japanese defenders, almost all were killed in action or died by suicide; only about 7,000 surrendered. Three of the four senior Japanese officers killed themselves, including Lt. Gen. Ushijima. The remaining officer, Col. Hiromichi Yahara, requested permission to commit seppuku but was directly ordered not to.

Material losses were also high; the Americans lost 36 ships with over 360 more damaged. More than 760 aircraft and 200 tanks were destroyed as well. The Japanese lost 16 ships, more than 1,000 aircraft, and about 20 tanks.

Civilians on the island suffered the most horrific toll.

Unlike Iwo Jima, the Japanese did not completely evacuate the civilian population of Okinawa. It is estimated that well over 100,000 civilians — one-third of the population — died during the battle. Many were caught in the fighting and were killed in the crossfire. Some were even used as human shields by Japanese soldiers.

The Japanese also mounted a program of mass indoctrination of the local population, telling them that Americans were barbarians that would slaughter or rape them if they surrendered. Large numbers of civilians willingly killed themselves or were forced to do so by Japanese soldiers to prevent their capture.

The fanatical resistance and appalling casualties, both military and civilian, led American leaders to reconsider an invasion of the Japanese mainland.

The fighting would have undoubtedly been harder and costlier. Estimates of American casualties in such a battle ranged from 225,000 to 1 million troops, while the Japanese estimated they would suffer as many as 20 million casualties.

At a White House meeting on June 18, President Harry Truman made it clear he wanted to prevent “an Okinawa, from one end of Japan to the other.”

In the end, the invasion of Japan never happened. Germany’s surrender on May 7, coupled with the atomic bombing of Hiroshima and Nagasaki and the Soviet invasion of Manchuria, made the Japanese realize that fighting to a negotiated surrender was impossible. On September 2, 1945, Japan surrendered unconditionally.

This story was first published in June 2020.