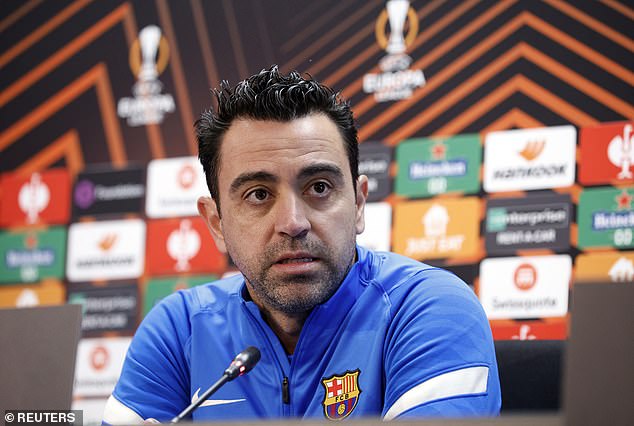 By Ollie Lewis For Mailonline

Xavi has leapt to the defence of Lionel Messi following the Paris Saint-Germain star’s penalty miss against Real Madrid, insisting it is ‘normal’ for people to criticise the Argentine.

Messi, 34, failed to convert from 12 yards when handed a spot kick in the first leg of PSG’s last-16 clash with Madrid in the Champions League, with Belgian stopper Thibaut Courtois saving his effort.

It was a rare error from a player that has struggled to hit the ground running since sealing a free transfer to the French capital last summer.

Messi has scored just seven goals in 21 appearances for his new club this campaign and is some distance from matching his sensational tally of 38 goals in 47 games last season.

And Barcelona boss Xavi, a former team-mate of Messi in Catalonia, has defended his ‘friend’, stressing that when a player of his stature misses a penalty, it is ‘normal’ to receive criticism, but he remains the best player in the world.

‘Playing for PSG and being Messi, it is normal people will criticise him’ he said. ‘If they only focus on that penalty shot then it’s normal to receive only criticism.

‘I wish him the best. He is my friend. For everything he’s given to Barcelona. He is the best player in the history of football, for me. Without a doubt.’

Kylian Mbappe spared Messi’s blushes with a sensational late strike to give the Parisians a one-goal advantage heading into the second leg at the Bernabeu.

Madrid goalkeeper Courtois revealed after the game that it was ‘obvious’ that Messi would direct the ball to his left, having done his homework on the Argentine.

‘Obviously he shoots a lot of penalties in a season so it’s hard to guess right,’ Courtois told BT Sport. ‘But he missed a few ones on this side [the right] so I think it was obvious he was going to the left.

‘Maybe in the middle he scored one against Leipzig, so I just said “okay we will go left” and I had a good save.’