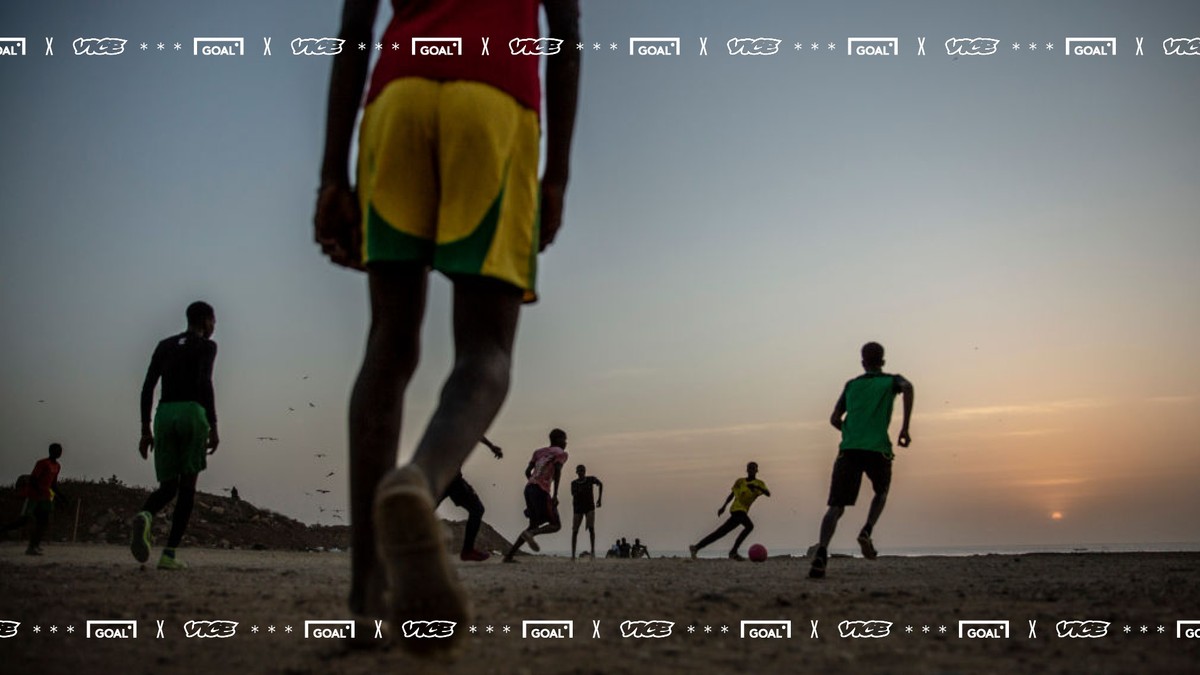 2022 marks the year of the UEFA Women’s Euro and the FIFA Men’s World Cup. All this week, VICE and GOAL will be collaborating to publish insightful, interesting stories from the world of football and fan culture, introducing VICE fans to GOAL and GOAL fans to VICE.

Every year, more than 6,000 young African footballers arrive in Europe in the hope of securing a contract and launching a professional career.

The above figures, released by France-based charity Foot Solidaire, are only a fraction of Africa’s total number of footballing emigrants if we take into account those travelling to other parts of the world for the same purpose.

Talented and ambitious, the young men – generally aged between 14 and 21 – are mostly unaware of the risks involved in their adventure. For many of them, their dreams of becoming the next Samuel Eto’o or Didier Drogba eventually turn to nightmares.

Authorities across Africa hold fake football agents responsible for the trafficking of these vulnerable young people. These shadowy figures are often part of a vast network of people in the football sphere who operate in the underworld. Without any valid licence, they nonetheless appear authentic.

They sell success stories to the families and guardians of aspiring footballers, who often dazzled against their better judgment – like Cheikhou Ndiaye from Dakar, Senegal, whose young son was lured to Portugal and is yet to return.

“I received a call asking for an appointment about my son, Bouba,” Ndiaye tells VICE. “The man on the other end said he watched my boy and that he was very good and had a bright future. I accepted and he came to my house accompanied by another man. They were both in their mid 30s. They looked refined. They were Senegalese but claimed they were based in Europe.”

The men showed Ndiaye, his wife and his brother compelling evidence of their son’s potential success – papers, ID cards, photos and videos of young African players already based in Europe.

“After two other meetings I was made to pay 2.8 million francs CFA ($5,600), which I raised by selling my only plot of land,” Ndiaye says. “They went to the embassy with my son and came back with a visa on his passport. I was shocked and impressed because it was so swift. Getting an EU visa in Senegal is not easy.

“And then they travelled to Portugal. My son called me after a month complaining that he was yet to have any trials with a club and that he was living with an old man in a small house. He said his agents handed him some papers and left three days after their arrival. That was in 2019. We are yet to hear from our son. We don’t know if he is still alive. We are praying.”

There are hundreds of similar cases each year from Senegal, according to the country’s Football Association, which claims the body is growing increasingly concerned about the safety of these young victims.

Some, like Ndiaye’s son Bouba, eventually lose contact with their worried families, raising questions about their survival. Others eventually return to their homeland to restart their lives, like Seydou Kabore from Burkina Faso, who was sponsored by his family to go to Marseille in France through another shadow agent.

“We paid the agent 2.5 million francs ($5,000). He secured a six-month visa for me but did not travel with me,” he tells VICE. “I was 18 years old then. When I got to Marseille, a young white man came to take me to a big house where I met other young Black aspiring footballers like me. Some came from central Africa, others from west and east Africa. They all said they paid money too.”

The men were given food only once a day. French police raided the house twice and took those without valid visas away; Kabore heard that they were eventually deported. After a month passed and the promised trials failed to materialise, he called the phone number on the invitation letter from his agent.

“The club asked me to quote the reference number on top of the letter and when I did they said the letter was not from them,” he says. “With two weeks to the expiration of my visa I decided to return to my country. It was a gut-wrenching experience that forced me to abandon my football dream. I am now 25 and jobless. What I realised finally was that we were as naïve as our families.

Observers and experts alike keep blaming African football associations for not doing enough to educate and protect young people, and say that parents and guardians must do their homework before letting loved ones abscond with shady agents. But it’s not always that straightforward.

Bassirou Sakho, a Fifa agent registered with the English Football Association and co-founder of Playmaker Sport Agency, urges African FAs to make the names of accredited agents available on their respective websites to allow easy verification.

“Most parents of these young boys are illiterate and therefore cannot easily do the necessary research,” he says. “If the names of affiliated agents are available on the FAs websites it would help the families check and see whether the person coming after their boy is authentic or not. But what I would like to say to parents is never give any money to an agent. Agents get paid when the player signs a contract and not before.”

Some FAs claim they are doing their best to curb player trafficking, but parents and guardians don’t make the task easy. Fifa regulations do not encourage international transfers of players under the age of 18, save for some conditions. Yet, these prospects keep travelling “with the blessings of their families”, says Augustin Senghor, Senegal FA president.

“Nobody likes the phenomenon. We are all against it. But how do they secure visas? They get parental authorisation, duly legalised. Some even alter their age so that they don’t look too young. Families never come to us to seek assistance. The only thing they see is the future success of their boy in a big club in Europe. We have organised several awareness campaigns, ‘stop giving money to agents’, yet money still changes hands. It’s a pity.”

Another FA official compares the football trafficking situation to human capital flight or brain drain, which he says could ultimately affect domestic leagues in Africa. “No young player wants to play or remain in the local leagues. They all want to hit Europe as soon as possible and that is why they easily fall victim to criminals,” says Malick Tohe of Cote D’Ivoire football federation.

There are a growing number of complaints about football trafficking in other destinations and territories other than Europe, such as North Africa and Gulf countries. Some players from sub-Saharan Africa end their journeys in Tunisia, Morocco or Egypt. Some get as far as the United Arab Emirates, Qatar and even Bahrain, ending up stranded and in danger.

Charles Ngah has been living in Tunisia since 2013. He left his country, Cameroon, alongside six other aspiring footballers. After paying 750,000 francs ($1,500) each to an apparently legitimate agency in Yaoundé, they were dumped in Tunis.

“I was playing in a division two club in Cameroon when the agents approached me and invited me to their office. I met other young footballers there, too,” he tells VICE. “The agency looked very authentic. They had a licence, framed and hung on the wall.  We were told we would have trials with Esperance Tunis [Tunisia’s biggest football club].”

“We travelled, arrived and lodged in a good hotel for one week before we were asked to leave for an apartment building. There I met some Nigerians and Ghanaians, who all claimed they paid 400,000 Naira ($1,000) and 7500 Cedis ($1,200) to get here. We waited for trials for months in vain and eventually realised we had been duped.”

After being kicked out of the apartment for owed rents, Ngah said the group dispersed, in search of any means of survival.

“Some of us got jobs at restaurants, others as cleaners while some were still jobless. We rented rooms in groups. You can find a little room accommodating seven or eight boys,” he says. “The biggest problem was papers and how to return home. In Tunisia, if you overstay your visa or entry permit you must pay fines for the extra days or months or years before being allowed to leave the country.”

According to officials, there are thousands of people from sub-Saharan African countries – including disillusioned footballers – stuck in the North African region, unable to return home because they cannot raise the fines which keep accumulating as their stay prolongs.

“Cote D’Ivoire embassy in Tunisia had to organise several repatriation trips for those in that category. Yet, the boys keep going every month and every year,” says Tohe.

As their dreams of playing professional football drift further away with time, some players are often sorely tempted to seek other purpose and meaning in their lives.

“I have fathered two children here in Tunisia, like many of my peers. Some are studying bricks and tiles fabrication and placement. And now, you find yourself in a more complicated situation that forces you to maybe abandon your dream. That’s the life we are all living here,” laments Ngah.

The harrowing tales are about the same in the Gulf, where immigration regulations appear more flexible than some places in North Africa. However, getting a club or even a trial without a regular invitation is near impossible, says Stephan Kimani of Kenya, who spent ten months in Qatar without success.

“Even if you are the next Lionel Messi, no club would listen to you. They all insist on coming through the right channel, which is being transferred by a local club to their team. The fake invitations organised by crook agents could get you in trouble there.”

Officials like Tohe believe that aggressive awareness campaigns are needed to effectively tackle football trafficking. But as long as the promise of a huge salary in Europe beckons, there will always be those who seek to prey on those who dream of following in the footsteps of Africa’s finest players.

Head to GOAL to read stories from VICE writers on: football, art and mental health matters for men, the Hollywood takeover of Wrexham, Arsenal’s retro merch boom and football fans and their tattoos.

Head to VICE for pieces by GOAL journalists on: the game’s unseen trafficking problem, the rise of the digital football fan, why grime artists are using footballing namechecks so often these days and how Ivory Coast’s World Cup heroes brought a pause to civil war.